We landed in Luxor (“Lu” as in Lulu – “ks” along with a clearing of the throat – “oh”) before breakfast and it was already hot. Luxor, later known by he Greeks as Thebes, is literally the greatest open air museum you can imagine. This is the region of the Upper Nile (remember, the Nile flows northwards) and the people here look like their Lower Nile counterparts from Cairo but with skin as dark as mine.

We don’t have enough time to see everything in Luxor. So we agree to see the two main temples, Karnak and Luxor, which are on the east bank, get lunch, and then get to our guest house on the west bank, leaving our luggage for the duration in the taxi of a taxi driver we just met at the airport. We risk never seeing our bags again but the people we have met in Egypt are honest. We decide not to squeeze in the famous necropolis on the West Bank, including the Valley of the Kings where pharaohs like Tutankhamun, Nefertiti, and the various Ramesses were buried. We know that our eyes will glaze over after 2-3 hours of Intense Egyptology.

Karnak temple is a sprawling colossal place. It has been built, rebuilt, and added on to by many pharaohs and dedicated to multiple gods, and was regarded one of the most sacred places in ancient Egypt. We restricted ourselves to the precinct of Amun-ra, the Egyptian King of Gods fused with the Sun God – about as powerful as gods get. You enter through the huge pylons past a row of ram-faced sphinxes. Inside is a hypostyle with 104 enormous columns – mostly built by Ramesses II. Then there’s Hatshepsut’s giant obelisk – a monolithic tower of inscribed granite rising almost 100 ft into the air, making it the world’s biggest obelisk. Incidentally, the obelisk at the Place de la Concorde in Paris is a smaller cousin of this and came from here. 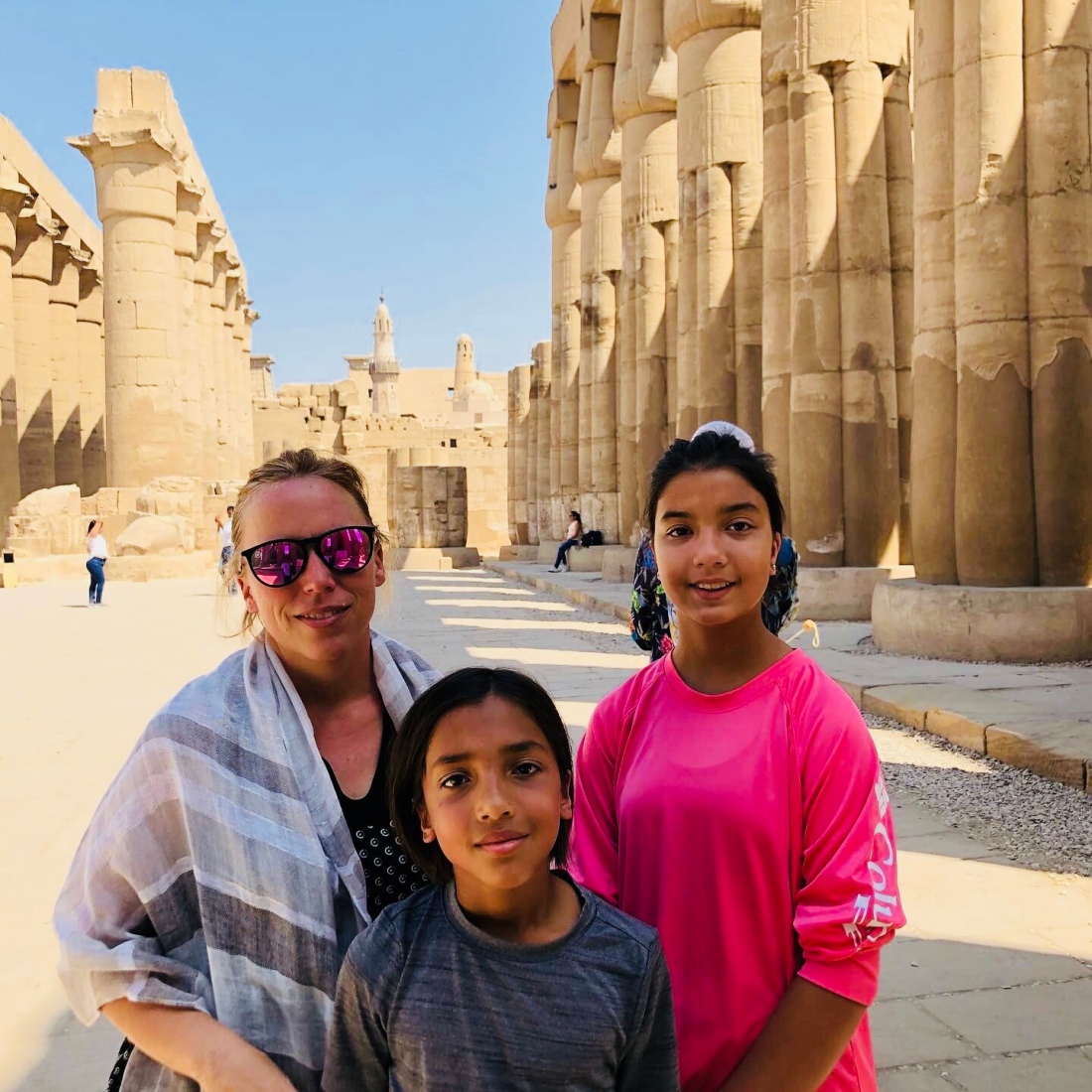 The next morning, after a rooftop breakfast at the guest house overlooking the hills of the Valley of the Kings and the mortuary temple of Ramesses III at Medinet Habu, we were driven about an hour south to the ancient town of Esna. Here we board the Adélaide, a dahabiya with 10 beautiful white cabins below, an expansive open deck covered with low sofas and cushions upstairs, and two triangular red and white stripped cotton sails on either end.

The Adélaide is a traditional shallow bottomed double masted wooden ship of the type that have sailed the Nile for thousands of years. She is the newest member (this is her fourth voyage) of the fleet of four dahabiyas belonging to a Mexican American, Enrique, a French designer, Eleonore (I think they are married), and Memdouh, their Egyptian boat builder and business partner.

The company has slowed the trip down the Nile to five nights – you could drive from Luxor to Aswan in three hours. We weren’t sure how Vivian and Evan would react to this but they loved it. Vivian asked if we could redo the trip again the next week. The dahabiya takes five sailors – to climb the masts and set the sails, to navigate at the giant helm, and to secure the boat to the shore for our frequent excursions. During periods of calm, the sails are put away and the dahabiya is towed by a long line attached to its tug. Soon after boarding I expressed interest in the boat. I was invited to sit and smoke a cigarette with its crew by Captain Sayed.

We ate, swam, walked, slept, read, and chatted our way to Aswan. The food was simple but delicious. Eleonore says they hire the best chefs from top hotels and then ask them to “cook like your grandmother did”. We take informal hikes through villages, and date and mango orchards, and the desert which is never far away. We go on guided visits to the main archaeological sites on the way. At Kom Ombo, there is a temple to the crocodile god Sobek and a large collection of mummified Nile crocodiles. At the narrowest point on the Nile we visit the enormous quarry at Gebel el-Silsila where entire hills of sandstone were once quarried to power the massive projects built by the pharaohs. We swim in the Nile. The current is swift – you walk along the shore upstream or are taken there on the tug and swim or simply float downstream. Eleonore isn’t a spring chicken but she swims more often than anyone else. Evan is worried about Nile crocs but once he is in the cold refreshing water he’s hooked. We get to know our fellow passengers from Tucson, Denver, California, London, South Africa, Cardiff, and Australia as the days go on. Everyone eats together at a long table and one night a group of Germans from a sister ship join us for dinner. A couple of times the crew and staff show up after dinner with drums and there’s an impromptu dance party on the deck – accompanied with hip shaking that would make Shakira proud. 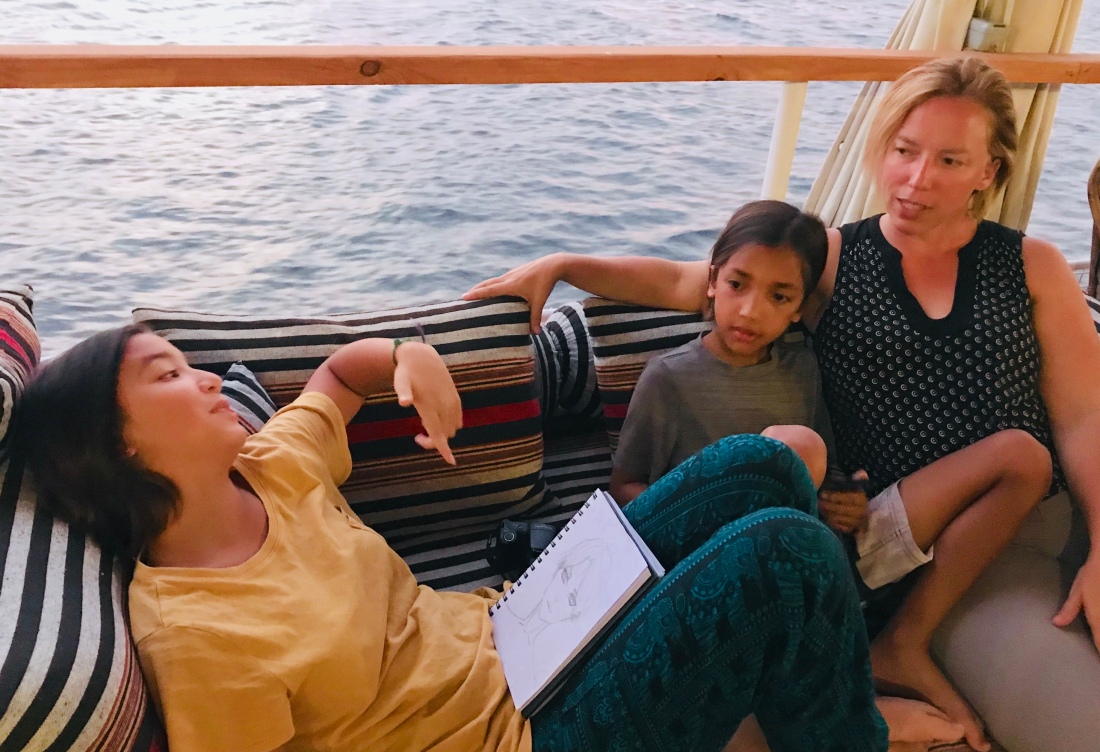 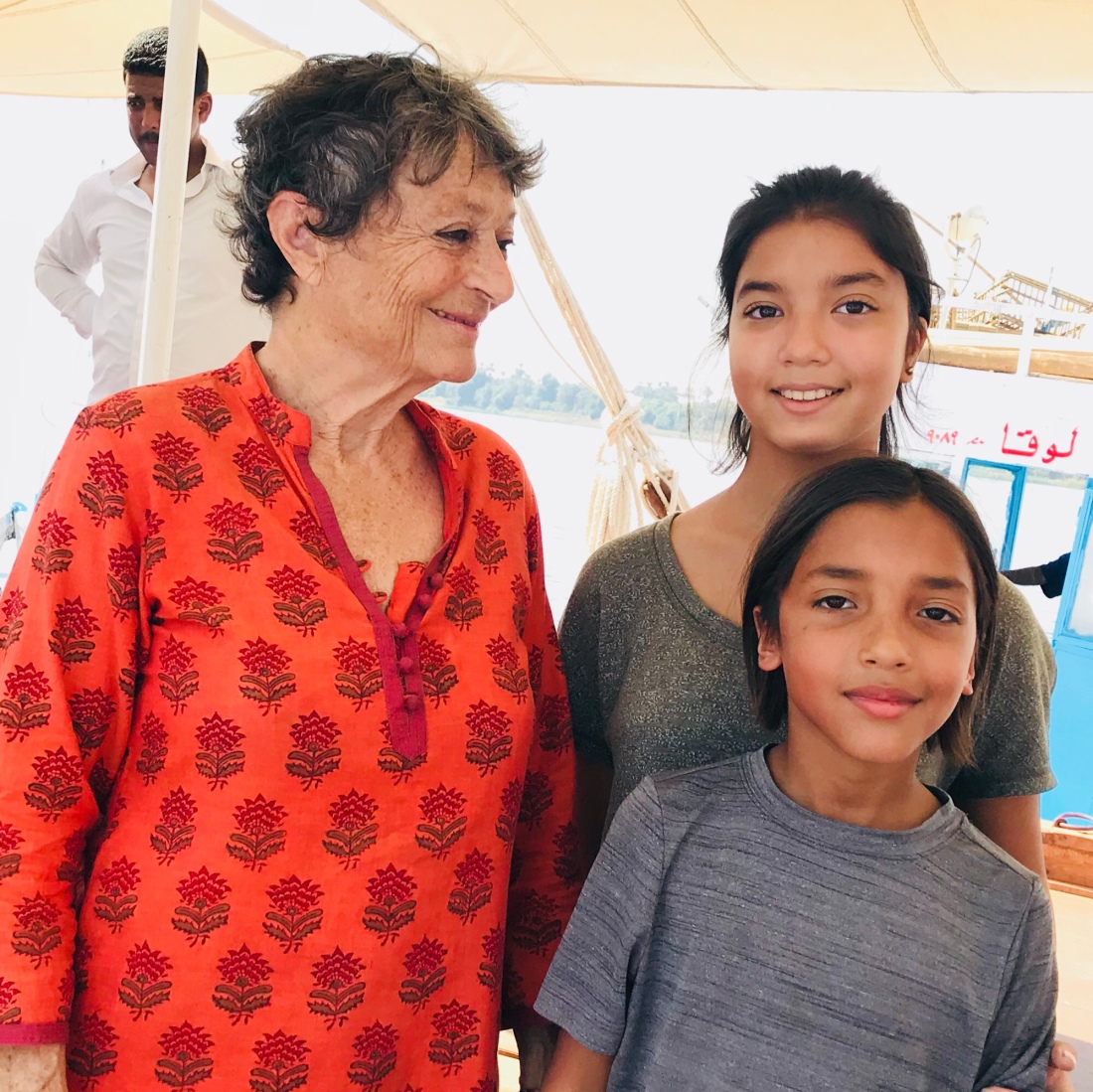 The days pass easily. At the end, we say goodbye to our new friends with invitations to visit them in different countries. Vivian and Evan got tonnes of compliments for being such amazing fellow passengers, leaving Jo and me baffled.

Egypt is beautiful. Egyptians are warm and welcoming, not withstanding the fact that I was often mistaken for an Egyptian or they were trying to sell me something. When they guessed “India?” I still got a big open smile and a handshake, even in tiny villages. Vivian and especially Evan got special attention and treats from almost everyone they interacted with.

I asked just one person about the future of Egypt, so my dataset is just one data point. “Will your children have a better life than you?” The answer was a clear and definite “no”. His parents had a better life than him. He thinks the trend will continue. I’m not sure why he thought that way but iPhones and video games made their way into his rambling reply. I am hoping he is an outlier.

Then there is the relationship with Israel. I started by asking our guide about Sisi. He said that Egyptians love their military and when Sisi came from the military they knew he was good. I asked if Nasser is considered a hero by Egyptians today. Our guide replied “No”. In further conversations I gathered that Sadat is, because he “won Sinai back”, while Nasser isn’t because he lost it to Israel. A satellite city in Giza is named 6th October City after the date Egypt Syria and Jordan initiated the Yom Kippur War in 1973. The date is a matter of pride in Egypt. But let’s hope that Egypt and Israel’s peace is durable enough to last our lifetimes.

We left our lovely temporary floating home, the Adélaide, at 4am, taking a cab through the city of Aswan before dawn. You could tell electricity must be made somewhere close by because the city is lit up like Las Vegas. We got one last look at the beautiful Nile shinning like a pool of gold in the rising sun before our airplane turned into the desert for the trip back to Cairo, and then via Athens, to the island of Mykonos. Onwards, but I think Egypt is another country we’ll come back to another day. And I can see Vivian and Evan returning as adults.

Later that same evening, through the miracle of modern technology we were perched on top of a rocky hill in Mykonos looking at the same sun as it set in the West, the land of the dead according to the ancient Egyptians. 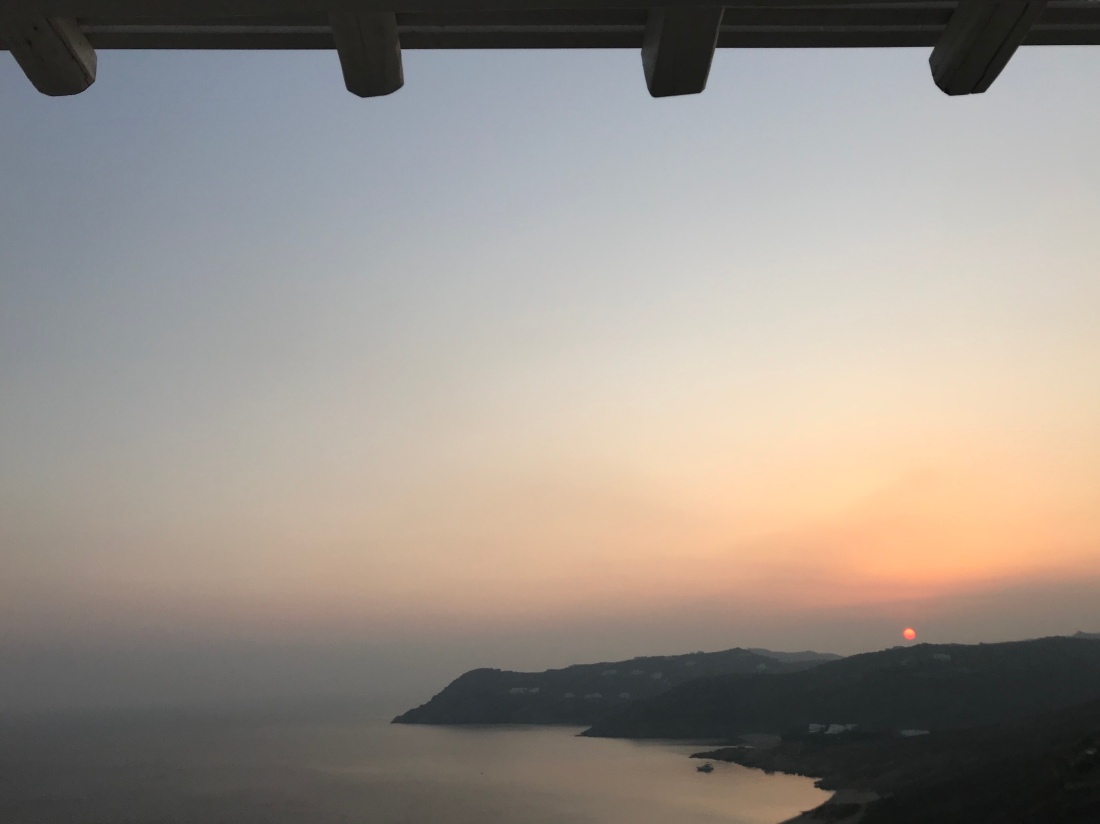 Due to a temporary bout of insanity we have left our perfectly fine home in Austin. We’ll return a year later after visiting about 30 countries. You can keep up with our plans, misadventures, and dreams right here. And if you live or are traveling in our neighborhood please let us know. View all posts by a0chatt

In the beginning there was a blog.

We are a family of traveling fools who trust that the journey is the destination. After almost eight months and twenty countries, the coronavirus has sent us home. But the journey never ends…